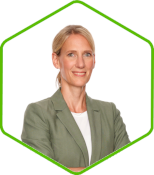 As no control algorithm will result in a perfect, flat BG curve (always being at target), BG will show some dynamic behavior, which can be used to describe the quality of glucose clamps. In a glucose clamp with good quality the BG variability (‘precision’) as well as the mean deviation from target level (‘control deviation’) are low. You can find a description of clamp quality parameter here.

However, control deviation (CD) might overestimate glucose clamp quality as periods with BG above target might be offset, at least partly, by periods below target. This limitation does not apply to absolute control deviation (aCD): 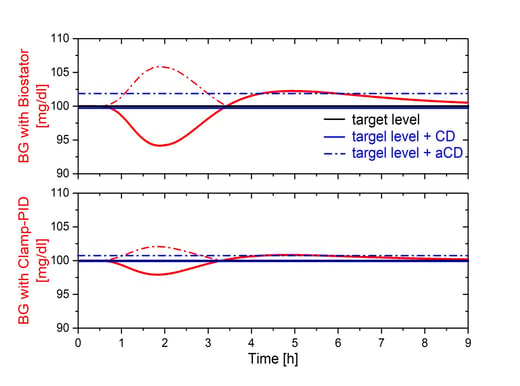 The well-established Biostator algorithm [1] used in the top panel leads to a BG-drop at around 2h and prolonged BG values above target level starting at 3.5h. BG values obtained with the new Clamp-PID algorithm [2], optimized for rapid and ultra-rapid insulins (see more information to new PID-algorithm here), shown in the bottom panel are much closer to target level, i.e. this glucose clamp has a better clamp quality than the above one. Nevertheless, control deviation of both algorithms are both close to zero i.e. mean deviation from target level is very small (solid blue lines). Large negative deviations from target level at the beginning of a clamp are nullified by later positive deviations.

To overcome this disadvantage aCD takes absolute deviations from the target level into account. That leads to a larger aCD for the Biostator algorithm than for the Clamp-PID algorithm (dashed blue lines). aCD is therefore much better suited to describe the quality of glucose clamp control algorithms to keep BGs stable and close to target.

We calculated CDs for 2-hour intervals of the two clamps in order to prevent a nullification of deviations below target at the beginning of the clamps through deviations above target later in the clamp. 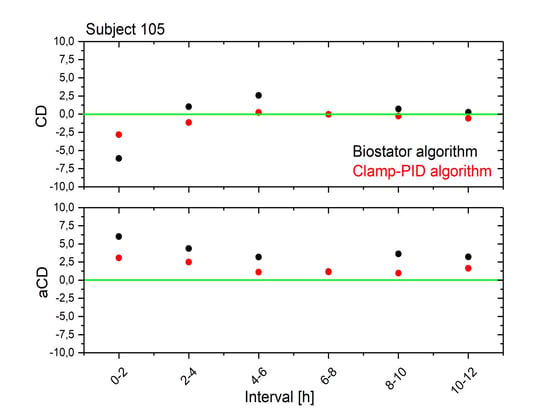 In contrast, aCD results for 2-hour intervals are positive and did not nullify each other as shown in the figure above. Similar to CD, the aCD values for the Clamp-PID algorithm are closer to target level in each of the 2-hour intervals, but because all values are positive, the combined total aCD is clearly smaller when using the Clamp-PID algorithm compared to the Biostator algorithm.

The following table shows the mean results (±SD) of all five subjects for both the individual 2-hour intervals and the complete clamps.

In contrast, the lower aCD-values with the Clamp-PID algorithm in all, but the last 2-hour intervals also leaded to substantially lower overall values versus those obtained with the Biostator algorithm (2.2mg/dl ± 0.6mg/dl vs. 3.6mg/dl ± 0.9mg/dl).