The history of antidiabetic medications has a great deal of importance due to the so-called ‘epidemic of the century’, i.e. diabetes mellitus [1]. The industrialised civilisation has a negative impact on diet and lifestyle, and as a consequence, the incidence of type 2 diabetes mellitus has become a serious public health issue.

The classic symptoms of diabetes were already described in the ancient Egypt, and at that time the first attempts to treat the symptoms took place. At that moment mixtures of bird pond, elderberry, fibres from plants, milk, beer, flowers and green dates were used. Remarkably, at the beginning of the 20th century there were still no therapeutic options sufficiently successful to treat diabetes. The discovery of insulin was undoubtedly a breakthrough in the history of diabetes, saving thousands of patients and also improving their life quality, particularly of those with type 1 diabetes. With the increasing wealth and the associated growing food supply in the industrialised countries, the incidence of type 2 diabetes augmented. Consequently, the development of drugs targeting the underlying causes of type 2 diabetes, such as insulin resistance and beta-cell failure, became a topic of interest for pharmacological intervention.

The first drugs to be available for treatment of type 2 diabetes were the biguanides, a drug class with its origins in nature. It had already been observed during medieval times that the plant goat’s rue, scientifically known as Galega officinalis, had a beneficial effect on diabetes [2]. Further research with biguanides took place in the early 20th century, even before the discovery of insulin in 1921. A compound synthetized from the goat’s rue, synthalin, was used in the 1920s to treat diabetes until it was found to be hepatotoxic. Due to this fact the discovery of biguanides did not have the impact that they deserved in the beginning. No biguanides were developed until the late 50s, when they experienced a renaissance with metformin and later with phenformin and buformin. Metformin was initially investigated by Jean Sterne, who published encouraging results in 1957, particularly regarding toxicity and hypoglycaemic effect [3]. Phenformin and buformin were withdrawn due to the high risk of lactic acidosis, a potential risk that is still debated for metformin. Currently, metformin, apart from being the only biguanide in the market, is the most widely used oral antidiabetic, particularly because it was the first antidiabetic agent to demonstrate a beneficial effect on cardiovascular morbidity and mortality in the UKPD-study [4].

The sulfonylureas were also protagonists during the first stages of diabetes treatment. In 1937 the hypoglycaemic activity of synthetic sulfur compounds was observed by chance when they were being used to treat typhoid [2]. From there on the first-generation agents appeared: chlorpropamide, acetohexamide, and tolbutamide. The second generation sulfonylureas were introduced in 1984 with the arrival of glipizide and glyburide. Later in 1995 glimepiride was released. Sulfnoylureas are linked to hypoglycaemia and weight gain, and numerous population-based surveys indicate that they are linked to an increase in overall and cardiovascular mortality [5-7]. In contrast, controversial results regarding safety have been obtained from randomised controlled clinical trials [8-10]. Furthermore, increasing evidence suggests that the treatment with sulfonylureas might cause faster exhaustion of beta cells [11, 12].

Biguanides and sulfonylureas were the only options available for oral treatment for a long time, with little being achieved in the field of new pharmacological targets. Patients had to wait until the 1990s for a new generation of innovative drugs with different mechanisms of actions to appear.

The decade of the 90s was marked by the arrival of new drug classes with innovative mechanisms.

The thiazolidinediones (shortly known as ‘glitazones’) were introduced for the treatment of type 2 diabetes mellitus in 1996, when troglitazone was approved by the FDA [13]. These drugs had a different molecular target (figure 1) but the benefits for the patients were noteworthy. Nevertheless, shortly after it was released cases of idiosyncratic hepatic failure were reported. The drug was removed from the market after 63 fatal cases were reported [2]. This fact did not discourage the research in the field, and rosiglitazone was introduced almost simultaneously with pioglitazone in 1999. Both these compounds were commercially successful, and in fact, pioglitazone was one of best-selling drugs in 2008 in the U.S. Pioglitazone has been shown to have a beneficial impact on cardiovascular disease and to reduce the risk of stroke, although it has also been associated with a possible increase in the incidence of bladder cancer. Nevertheless, the evidence in this regard is rather inconsistent and new evidence contradicts this notion [14]. Rosiglitazone was withdrawn from the market due to an alleged increase in cardiovascular mortality [15].

The α-glucosidase inhibitors drugs started to be used in 1995 with the arrival of acarbose. A year later miglitol was introduced to the market. The idea behind these drugs was to slow down the rate of absorption of carbohydrates. These drugs have been increasingly popular in Asia, but are less commonly used in other parts of the world due to the necessity of multiple doses and the presence of bothering gastrointestinal effects.

The group of meglitinides made their entrance in 1997 with repaglinide and later with nateglinide. These drugs act similarly as sulfonylureas, despite being structurally different. They have a shorter duration of action, and therefore, are supposed to cause less hypoglycaemia. However, because of their shorter duration of action they need several daily doses, which might be the reason why sulfonylureas are still preferred.

The introduction of the glucagon-like peptide-1 receptor agonists (GLP-1 RA) is arguably one of the greatest advances in in the recent history of antidiabetic medications. Their discovery was based on the ‘incretin effect’ [16], introduced in 1932 by La Barre, which emerged from the notion that the oral ingestion of glucose trigger endogenous insulin secretion more than an intravenous glucose infusion with similar increases in blood glucose. Nevertheless, the first experiments with GLP-1, the intestinal hormone responsible for the higher insulin response, did not take place until 1983 [17]. The mechanism of action of GLP-1 and GLP-1 RAs, however, goes beyond a stimulation of insulin secretion and rather target different organs such as the central nervous system, pancreas and gastrointestinal tract, where they have various beneficial (but also some undesired) effects. Exenatide was the first drug of this group to be approved (in 2005) [2]. A number of formulations are available in the market now, all of them for subcutaneous (once or twice daily, but also once weekly) administration. Interestingly, a recent study demonstrated a reduction in overall and cardiovascular mortality during treatment with liraglutide [18]. The first oral formulations are currently under clinical investigation and the future perspectives seem promising. 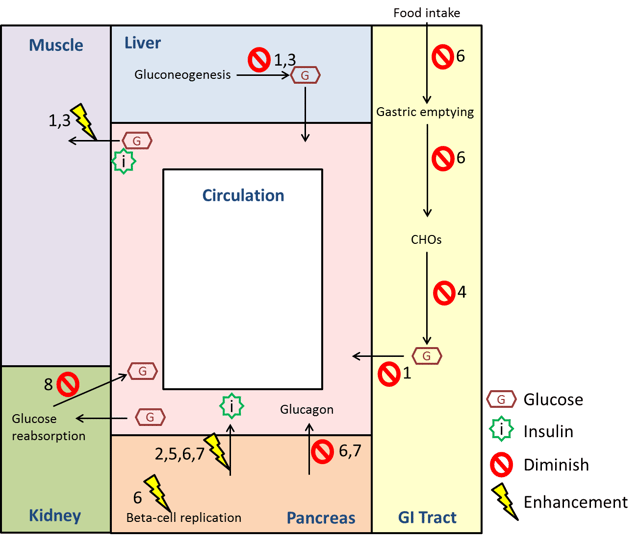 Dipeptidyl peptidase-4 (DPP-4) inhibitors, which became available shortly after exenatide, also use GLP-1 as the underlying mechanism of action by blocking the enzymatic degradation of incretins. The first drug of this class, sitagliptin, gained approval in 2006 and was followed by saxagliptin, vildagliptin and linagliptin. Although the blood-glucose-lowering effects of DPP-4 inhibitors are weaker than those of GLP-1 RAs, this drug class has become increasingly popular as they are well tolerated and available for oral administration.

A further step was taken with the introduction of sodium glucose co-transporter 2 (SGLT-2) inhibitors, an interesting group of medications with a completely novel mechanism of action. The glucose lowering effect of this drug class is mediated by an increase in renal glucose excretion. The first medication in this group to get approval in the U.S. was canagliflozin, which became available in 2013. In 2014 dapagliflozin and empagliflozin were approved. Interestingly, a recent study with empagliflozin showed a reduction in overall and cardiovascular mortality and a marked reduction in hospitalisation due to heart failure [19], a fact that might further promote its use in the future.

Learn more about cause and treatment of diabetes. For example watch our free webinar on possible future pathways to be addressed for treatment development. Or read more on beta cell dysfunction. Explore our blog and don't miss future posts by signing up for monthly blog updates on the right of this page. Just put your email and we will keep you up to date.