When we last posted about the new clinical trial regulations, we promised to give an update to make sure you stay informed about the ongoing change process and any updated timelines. So here it comes. Make sure to read and to sign up for our blog posts, so you won't miss future updates on this important change in regulation.

Points to consider from an EC point of view

On the 32nd Annual congress of the German Society for Pharmaceutical Medicine the chairman of the Working Party of German Ethics Committees, Prof. Joerg Hasford,  as well as the head of the department “Scientific Service” of the BfArM,  PD Dr. Thomas Sudhop, presented their current view on the implementation of the above mentioned regulation in Germany.

Whereas PD Dr. Sudhop mainly emphasized the initiative of the BfArM to start a pilot project mirroring the procedures to be followed once the CTR EU No. 536/2014 is in place, Prof. Hasford expressed his concerns regarding the process of the mutual involvement regarding the assessment of a clinical trial as well as the stipulated requirements on the composition of the Ethics Committees (EC).

After the complex set up of a working party involving BfArm and EC, specifically IT requirements had to be taken into account. Particularly the handling of the official answers to an applicant (e.g. final approvals are sent separately by BfArM and EC), adherence to timelines etc. need to be handled with care. Within the Pilot project currently 10 projects are or have been under review (all multicentric studies); 3 of them already received an approval.

However, Prof. Hasdorf presented some points still to be considered before implementing the procedures ultimately.

For the ECs already the requirements of the composition of the ECs are difficult to adhere to: a biostatistician should be available, the gender distribution should be 50:50 and the members should always have an updated scientific expertise.

Moreover the healthcare legislation of each federal state regarding the composition of the EC has to be taken into account (e.g. NRW needs  a pharmacist, RLP need 2 patient advocates and an advocate of the caring profession).

Furthermore, the committee’s office shall be equipped with adequately qualified staff in combination with a certain infrastructure to be able to respond within short timelines regarding reconcilement- and/ or evaluation processes.

Another important point to be still reconsidered is the registration system. All participating ECs shall register at the Competent Authorities and demonstrate their ability to comply with the above mentioned requirements. A suggestion for change has been presented by the Working Party of the Medical Ethics Committees (Germany) in cooperation with the German Medical Association regarding the revocation of the registration.

A renewal of the registration should also be described.

The fourth amendment of the AMG (Arzneimittelgesetz) with regard to the New Clinical Trials Regulation (CTR) EU No 536/2014 has been approved on April 4, 2016 by the Federal cabinet (Bundeskabinett), the first reading on April 14, 2016 in the Lower House of German Parliament (Bundestag) has taken place as well as the first consultation in the Upper House of German Parliament (Bundesrat) on April 22, 2016. The law was announced on the 23rd of December 2016 in the Federal Law Gazette and came into force on the 24th of December 2016. But despite this progress there are still details to be discussed and re-adjusted in the meantime until the CTR can be finally implemented.

Actual timelines according to the Working Program of EMA for 2016: 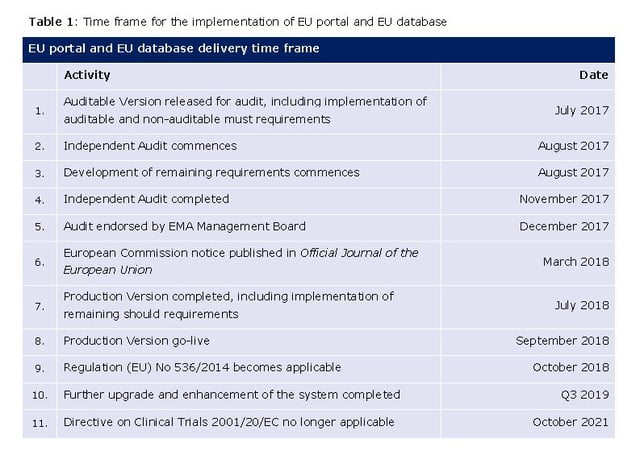 Stay up to date with the implementation process of the new clinical trial regulations by signing up for our blog updates (once per month). We will keep you informed as the new process progresses into implementation.

To get the full picture, also read our previous updates on the new clinical trial guidelines.