The main anatomic method to study the microvasculature is the in vitro preparation of isolated vessels. The results of such experiments are, however, difficult to interpret because in in vivo physiology there might be other factors playing decisive roles for both function and dysfunction. One of the techniques for investigating the microvasculature in vivo is transdermal iontophoresis, a technique for delivery of test substances into the skin. Iontophoresis possess the capacity of assessing the action of vasoactive test substances in the cutaneous microcirculation [1], which provides helpful information about the vascular physiology.

Iontophoresis is based on the general principle that like charges repel, and unlike charges attract. When a negatively charged drug is to be delivered across the epithelial barrier, it is therefore placed under a negatively charged delivery electrode (cathode) from which it is repelled. It is then attracted towards a positive electrode (anode) placed elsewhere on the body. In the case of a drug with positively charged ions, the electrode orientation is reversed. The drug dose delivered by iontophoresis is approximately linearly proportional to the electrical charge, i.e. the electrical current strength multiplied by the duration of the current pulse.

Iontophoresis can be combined with laser Doppler flowmetry (LDF), a technique that can measure microcirculatory flow in a tissue. LDF uses the frequency change that waves undergo being reflected by moving objects such as the red blood cells in the vessels [2]. The microvascular response to vasoactive test substances introduced in the skin by means of iontophoresis is a useful and non-invasive method to investigate the effect of such substances in microvasculature [3]. The high temporal resolution of LDF enables the assessment of blood flow changes to the vasoactive test substances while they enter the skin during iontophoresis.

Acetylcholine  is a muscarinic receptor agonist that causes vasodilation by stimulating the release of nitric oxide in the endothelium (Figure 1).  It has been demonstrated that the relaxation of vascular smooth muscle cells induced by acetylcholine is dependent on the functional integrity of the endothelium [4]. For this reason acetylcholine is useful for investigation of endothelial dysfunction in a number of clinical conditions, such as diabetes and hypertension. 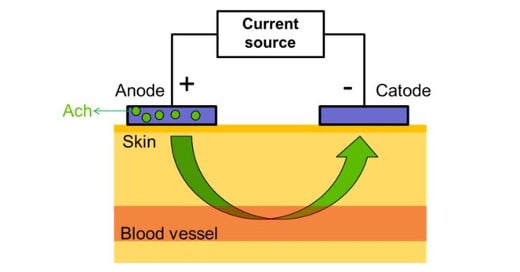 Iontophoresis poses, however, a few drawbacks. Firstly, the exact amount of drug that penetrates the skin during iontophoresis is unknown. This depends on a number of factors such as the duration and intensity of the electrical charge. Currently, investigations of iotonphoresis have tried to overcome this limitation by using standardised protocols that allow an approximate estimation of the drug administered. Nevertheless, skin features such as pH, thickness and humidity can also affect the amount of molecules that cross the skin barriers, making this calculation an unsolved issue. Another limitation of iontophoresis is the risks of burns, which can be caused by changes in the skin pH or directly by the current being applied; although the risk is minimal, attention should be given to the integrity of the skin and to the intensity of the current. Under normal circumstances a maximum current of 200 μA is well-tolerated and innocuous to the subjects.

Iontophoresis is a non-invasive, safe and cost-effective method for investigating microvascular aspects in clinical studies. Acetylcholine iontophoresis is particularly useful for the investigation of endothelial function, which can be compromised in a number of diseases. A better understanding of the local drug kinetics and response dynamics during iontophoresis is still necessary.