Diabetes Mellitus (DM) is often considered a risk factor for mild cognitive impairment (MCI) and the association between these pathologies has been well established by several clinical studies [1, 2]. However, this relationship has mainly been studied in patients suffering from Type 2 Diabetes.

Therefore, recent investigations explored whether there is an association between Type 1 Diabetes and mild cognitive impairment.

One of the bigger clinical studies took place in India and was conducted by Kumar et al. [3] in 2017. In their cross-sectional study, the cognitive status of 126 T1DM patients was examined using the Montreal cognitive Assessment (MoCA) [4]. Possible correlations of MCI with the following parameters were sought: HbA1c, lipid profile and high-sensitivity C-reactive protein (hs-CRP) reflecting diabetes control, dyslipidemia and chronic inflammation, respectively.

Patients in this study were aged between 15 and 59 years, either known or diagnosed recently to have T1DM (ADA guidelines 2017) and having signed the Informed Consent Form. In addition to having an HbA1c of ≥ 6.5% or fasting blood glucose of ≥ 126mg/dl, two autoantibodies had to be positive to be included in this study. Patients ≥ 60 years, having a T2DM, an established diagnosis of dementia or other severe illnesses or specific chronic medications were excluded from this study.

Ninety patients of the 126 enrolled subjects were assessed to show MCI (71.42%) with a mean age of 28.10 (SD 8.69) in this group. In this study gender did not have an impact on MCI, which is in contrast to other studies were a gender difference especially for the progression of mild cognitive impairment in females was demonstrated [5, 6]. 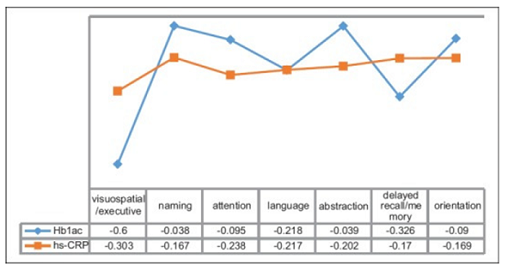 Figure 1: Correlation of different components of MoCA score with HbA1c and hsCRP [3]

With regards to other metabolic parameters, a prevalence of dyslipidemia was found in 78.6% of the patients with MCI, demonstrated by triglycerides > 150mg/dl (Figure 2); moreover, a significant correlation was discovered between high levels of hsCRP and MCI (Figure 1).

Cognitive dysfunctioning is already described within 2 years of onset of T1DM in children [7, 8]; most affected tasks were learning and memory skills, both verbal and visual, mainly in children with an early onset of the disease compared to children with a later onset. Taking this into account as well as the fact that the treatment for T1DM evolved enormously during the last nine decades [9] it is a valid question how cognitive performance is affected in patients with T1DM in the present era.

Based on their data the authors of the study concluded that mild cognitive impairment could be considered as another complication of Type 1 Diabetes.