In order to improve postprandial glycemic control, new insulins are developed, with earlier glucose lowering action by advancing the time to onset of action [1, 2, 3]. The standard for investigating such pharmacodynamic properties of insulin preparations is the euglycemic clamp [4, 5]. The current method established for determining onset of insulin action requests a blood glucose (BG) decrease from baseline (DFB) by at least 5 mg/dl [6, 5]. Unfortunately, DFB under- or overestimates onset of action depending on whether baseline BG trends are decreasing or increasing.

To overcome these limitations, we developed a novel method for the determination of pharmacodynamic onset of action, which incorporates baseline BG trends, yielding more accurate and reproducible results that are not confounded by unstable blood glucose values before onset of action.

We define pharmacodynamic onset of insulin action as a change in trend (CIT), characterized by a significant decrease of the BG slope.

Starting at dosing, a linear regression is performed based upon the minute-to-minute glucose values over the preceding 30 minutes, reflecting the underlying BG trend. Missing values are linearly interpolated in order to maintain the 30 minutes regression. As long as BG values fall within or above the 95% prediction interval of the regression, onset of action is not reached and the regression with the prediction interval continues as a moving regression. The first BG value below the lower prediction limit indicates a significant decrease of the BG slope and thus defines the pharmacodynamic onset of action.

The figure illustrates the principle of the CIT method: Time of dosing was at 0 min. The asterisk marks the computed onset. The area highlighted in grey reflects the prediction interval with the regression line in the center and the corresponding upper and lower 95% prediction boundaries. 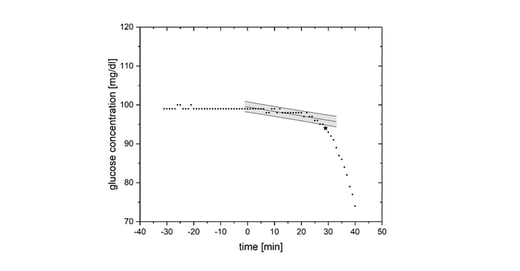 The new algorithm was validated on an artificial subject in in-vitro clamp experiments. To this end, we used the same experimental setting as previously described in the blog by Dr. Carsten Benesch on August 21, 2019, using the same automated glucose clamp device (ClampArt, Profil, Germany) as in clinical trials.

18 clamp experiments were performed using the time-action profile of a rapid acting insulin taken from previous glucose clamps performed at Profil. Different basal glucose trends were simulated by setting different basal rates of change. As BG levels are more stable under clamp conditions than in real-life in type 1 diabetes [7], we chose a range from -1 mg/dl/min to +1 mg/dl/min. 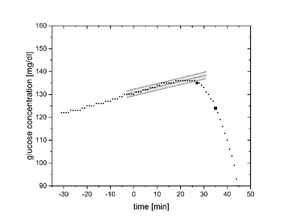 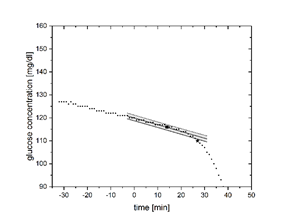 The table shows all mean deviations from median at the respective rates of change tested with both methods. It can be seen that the confounding impact on DFB increases with the magnitude of rate of change. CIT provided a significantly lower variability, illustrating that the algorithm is robust for different BG trends. 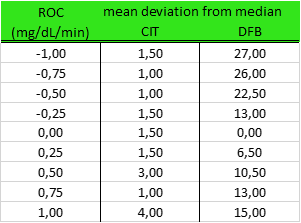 The reduced variability should improve the characterization of onset of action of different prandial insulins giving increased statistical power and providing more accurate numbers for onset of action.

The CIT algorithm has now been integrated in the ClampArt software as an add-on tool and will be used in clinical glucose clamp studies from now on. 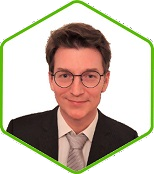