Finally breakthrough in the immunological approach to type 1 diabetes

Type 1 diabetes is a T-cell mediated autoimmune disease. For more than 40 years, researchers have tried to intervene in the autoimmune process to halt or perhaps even reverse the slow destruction of insulin producing beta cells [1]. This has proven an elusive goal, but very recently FDA granted a breakthrough therapy designation to teplizumab, an anti-CD3 monoclonal antibody  [2]. The drug modifies CD8+ T lymphocytes, which are thought to be the key effector cells that kill beta cells. 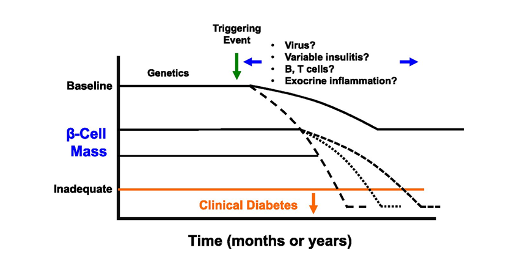 Clinical trial results that underlie this designation were published in the New England Journal of Medicine [4]. Seventy-six relatives of people with type 1 diabetes, mostly adolescents, who were at risk for developing the disease given the presence of at least two antibodies indicating beta cell autoimmunity and dysglycemia at a glucose tolerance test were randomized to teplizumab or placebo. Three stages can be defined in the development of type 1 diabetes. In the first stage, only antibodies are present. The more antibodies are present, the higher the risk of developing the disease, with 3 antibodies conferring a 100% risk to develop the disease within 15 to 20 years [5]. The second stage is defined by dysglycemic response to a glucose load and stage three by overt disease. The authors hypothesized that stage 2 would represent a stage where the autoimmune process was active but still could be modified. Treatment with teplizumab consisted of a daily intravenous injection during 14 days in a dose escalation regimen given in an outpatient setting. The median time to diagnosis of type 1 diabetes was 48.4 months in the teplizumab group and 24.4 months in the placebo group (hazard ratio, 0.41; 95% confidence interval,0.22 to 0.78), after adjustment for age and antibody status. Thus, while there was a two year delay in time to disease, there was no indication of longer lasting disease prevention. Major side effects were a reversible lymphocytopenia and rash. Subgroup analyses were predefined but suffered from low numbers, statistical reporting without the appropriate test for interaction, and absence of  correction for multiple testing. However, it seemed that the absence of HLA-DR3 and presence of HLA-DR4 conferred a better response to teplizumab. Future studies should investigate the possible added value of repeated courses of teplizumab.

The first positive trial with a anti CD3 antibody in recently diagnosed type 1 diabetes patients was reported in 2002 [6]. Thus, it is intriguing to see how it can take almost 20 years to reach a breakthrough designation. Provention Bio acquired the development rights of the compound from MacroGenics in May 2018 and recently initiated a phase 3 trial.

As to the interest of large pharma into developing immunological drugs for type 1 diabetes, during their Q2 earnings call, Novo Nordisk announced that a phase 2 trial with the combination of an immune-modulator, based on an anti-IL 21 compound and liraglutide in people with newly diagnosed Type I diabetes was successfully completed in May 2019 [7]. The primary objective was to evaluate beta cell function after 54 weeks of treatment, followed by 26 weeks observation period without treatment in a four arm design: placebo, liraglutide, IL-21 and anti-IL-21 plus liraglutide. The trial demonstrated statistically significant improved beta cell function as measured by C-peptide levels in the combination treatment arm compared to placebo. Furthermore, there was an improvement in glycemic parameters and a reduction in the use of insulin at the end of the 54 weeks period. There were no safety and tolerability constraints of such during the trial, and Novo Nordisk is now evaluating next steps together with the regulatory authorities.

In conclusion, an impressive and sustained research effort in a field where harvesting seemed difficult finally pays off. It is hoped that patients with diabetes will soon benefit from immune modulation.