The hyperinsulinemic euglycemic clamp is the gold standard required by regulatory authorities for quantifying the glucodynamics of insulin preparations in clinical trials. Glucose clamping avoids confounding effects due to fluctuations in blood glucose concentrations as seen in the insulin tolerance test.

The hyperinsulinemic euglycemic clamp is also the method of choice for measuring human insulin sensitivity in clinical trials (deFronzo et al., 1979; Heise & Heinemann, 2001; Heise et al., 2016). Today CE-labeled medical devices like ClampArt® are available. ClampArt® takes advantage from an intravenous (iv) continuous blood glucose monitoring and a smart algorithm.The algorithm closes the loop between a sensor-based blood glucose monitoring and a precision pump for iv administration of glucose exactly as required to maintain the glucose clamp level in the condition of insulin administration. For ClampArt® the compliance with high standards that cover different dimensions of clamp quality has been demonstrated (Benesch et al. 2015).

In part 1 of this blog we discussed how a 2-step iv insulin infusion protocol can be used for the assessment of systemic human insulin sensitivity adjusted for the mass effect of glucose, i.e. for glucose effectiveness. Here we are going to discuss a protocol which combines a 2-step iv insulin infusion with the iv infusion of stable isotope-labeled glucose. By this a differentiation between hepatic, peripheral, and systemic insulin sensitivity can be achieved in clinical trials.

For the sake of simplicity we use a single compartment model here assuming a homogenous distribution of glucose in the human body. For a more in-depth examination of the subject we refer to the seminal work of Steele (1959) and the standard reference work on Isotope Tracers in Metabolic Research by Robert R. Wolfe and David L. Chinkes (ISBN 0-471-46209-8). We here assume, that the bulk of endogenous glucose production (EGP) originates from the liver. However the contribution of hepatic glucose production (HGP) to EGP may differ between healthy people, patients with type 1 diabetes and those with type 2 diabetes. Also pharmacological interventions might account for shifts in the relative proportions. Depending on the trial goals the contribution of liver, kidney and the ileum to EGP needs to be specified in each experimental condition. 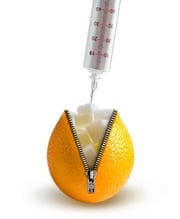 Step zero is designed for the experimental assessment and calculation of the basal hepatic glucose production, i.e. the hepatic glucose production in the fasting condition. From a technical point of view step zero serves to achieve an isotopic steady state by establishing a balance between the amounts of tracer and tracee entering and leaving the compartment, respectively.

To rapidly establish an isotopic steady state a primed continuous infusion of e.g. [6.6]-2H2-glucose could be performed e.g. as follows

The glucose clamp needs to be adapted acc. to the type of trial participants under investigation and the specific issues addressed. The assessment of the tracer/tracee ratio in blood samples is based on GC/MS analyses.

At the same time peripheral tissues (mainly muscle and fat) remove glucose from the compartment as described by the rate of disappearance Rd [mg·min-1].

Shortly before starting the low dose insulin infusion a series of blood samples must be collected for analytic confirmation that the isotopic steady state has been achieved.

In the condition of the hyperinsulinemic euglycemic clamp the insulin-induced suppression of HGP is exactly compensated by the exogenous infusion of unlabeled glucose.

In the „step one“ condition at isotopic steady state a lower level of HGP is adjusted (HGPStep1).

For calculation of the hepatic insulin sensitivity ISILiver [µU/L·mg-1·min-1] the GIRStep1 needs to be normalised to the corresponding plasma insulin concentration INS [µU/L].

In the second step the insulin infusion needs to be increased in order to blunt HGP and to stimulate peripheral glucose uptake, i.e. to increase Rd. Again, the glucose clamp level remains unchanged due to a further increase in GIR which mirrors the sum of the suppression of the residual HGP still present in the „step one“ condition (HGPStep1) and the stimulation of peripheral glucose uptake. Replacing the peripheral uptake of tracer and tracee by the infusion of tracee only (GIR) leads to dilution of the tracer in the compartment and eventually to adjustment of a new steady state with a lower TTR.

The peripheral glucose disposal Mperioheral [mg·kg-1·min-1] and insulin sensitivity (ISIperipheral) can be calculated as follows:

The assessment of hepatic and peripheral insulin sensitivity by using the hyperinsulinemic glucose clamp is appropriate and well feasible in the setting of clinical trials. The methodology can be considered the golden standard for assessment of hepatic and peripheral insulin sensitivity in terms of glucometabolic control. Calculation and modeling (1- compartment) are simple due to performing measurements at isotopic equilibrium but sometimes needs to be adapted to compensate inaccuracies from the simple model assumptions.

We here described a protocol variant maintaining the clamp level by the infusion of unlabeled glucose. Optionally an insulin-triggered infusion of labeled glucose could be used (Finegood et al. 1987). Due to the availability of stable isotope-labeled glucose no exposure no additional exposure to radiation is required.

The use of stable isotope-labeled glucose is cost-intensive. The protocol provides no differentiation between glucose production by liver, kidney and ileum, and no differentiation between pathways (gluconeogenesis, glycogenolysis) contributing to EGP. The results may also depend on the individual plasma insulin/glucagon ratio. Methodological options include assessment of the HOMA index, of OGTT-based indices and using somatostatin clamps which would allow for the experimental adjustment of defined insulin/glucagon ratios. Assessment of the arteriovenous difference across liver tissue would allow for the assessment of glucose Ra on site.

Using the hyperinsulinemic euglycemic clamp for the assessment of hepatic and peripheral insulin sensitivity is committed to the glucocentric narrative about diabetes. Particularly in the liver insulin beyond glucose production also affects protein synthesis, lipidogenesis, and autophagic proteolysis, to name a few. All these pathways display different insulin sensitivities and might be differently affected in the condition of (pre)diabetes and also by the blood glucose-lowering drugs used for the treatment of diabetes. Although the hyperinsulinemic glucose clamping is an excellent tool for measuring the glucometabolic susceptibility to insulin complementary methods should be applied to address the impact of both new and widely used drugs on the large variety of insulin-sensitive pathways in the different cell types and tissues.